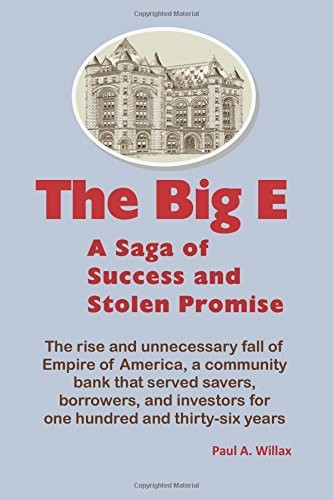 The Big E... A Saga of Success and Stolen Promise PDF format

﻿A gripping and enlightening story of how an inspired and dedicated team used strategy, innovation, and common sense as they endeavored to save a venerable financial institution in the midst of a national economic crisis. A must read for both aspiring and seasoned business leaders and public policy-makers.

The Big E… A Saga of Success and Stolen Promise chronicles the growth, accomplishments, and unnecessary demise of Empire of America Federal Savings Bank – the “Big E,” one of the largest and most diversified savings banks in the nation. It served customers in almost every state, and was cited as one of “the most innovative financial service companies in the world.”

From its origins, the Big E pledged to “do things of import.” Each successive year found it offering even greater promise for the future… until another kind of promise was broken. When the federal government reneged on contractual promises it made in connection with Empire’s assumption of thirteen failed savings and loan associations during the “thrift crisis” of the 1980s, the bank’s great hopes and dreams were tragically “stolen,” and the bank was forcibly liquidated.

​While the bank’s protests against such appropriation were ultimately upheld by the Supreme Court of the United States, the decision came too late to save the bank. What was saved, however, is an invaluable saga of one bank’s ingenuity and industriousness in the face of unprecedented economic turmoil and meddling bureaucracies.

This book tracks the history of the savings industry in the United States and documents how, for decades, federal and state governments dabbled destructively in an inherently free marketplace to advance faulty policy agendas which ultimately brought about the unwarranted decimation of an entire industry.

​The story in these pages gives real meaning to President Ronald Reagan’s admonition in 1982 to business leaders: “If you go to bed with the government, you can expect more than a good night’s sleep.” Hopefully, the events recounted herein will serve to alert future generations to the kinds of calamities that can be wrought by virtue of the frailties – and, often, the disingenuousness – of governmental promises and pledges.